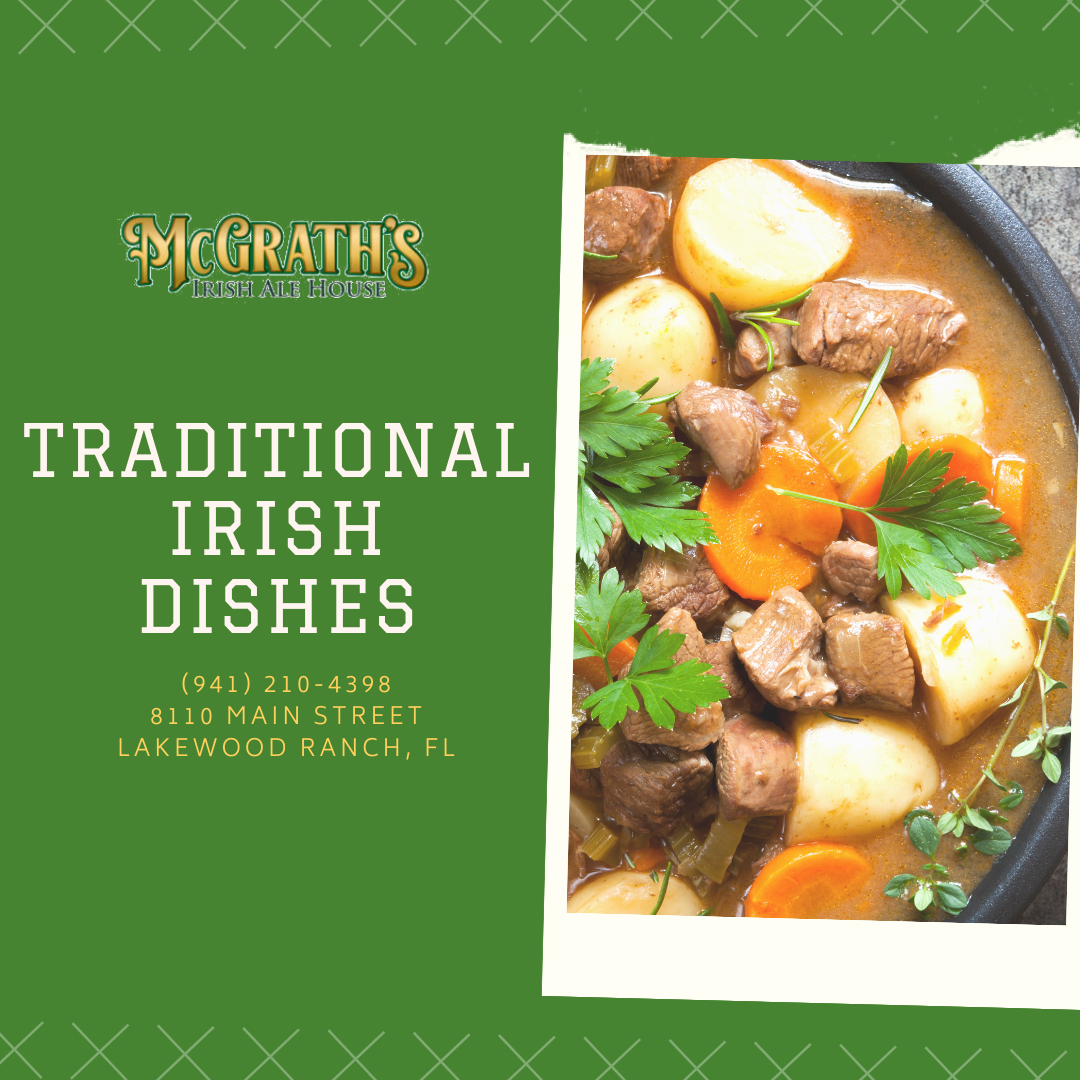 McGrath’s Irish Ale House in Lakewood Ranch has put together some tasty traditional Irish dishes. We look forward to seeing you and your families dine with us soon.

Soda bread. Soda bread is a well-known food with seemingly endless variations. Whether you prefer it containing honey, sugar, dried fruits, or with seeds, bran and oats tossed in the mix, this delicious bread is served sliced and buttered.

Shellfish. Clams, cockles, oysters, mussels, and prawns are ample in Irish cuisine. Choose your favorites and serve them in any way that you prefer.

Irish stew. This classic dish is traditionally prepared with mutton, onions, and potatoes and is cooked in one pot. Nowadays, Irish stew is commonly made by adding lamb with broth and a number of herbs including thyme, bay leaves, and parsley.

Boxty. Different kinds of boxty are potato dumplings, potato pancake,s and potato bread which all require that shredded uncooked potato is combined with mashed potatoes. Boxty dumplings: mixed with flour and salt, then boiled before slicing and fried in butter. Boxty on the pan: mixed into a pancake-like batter prior to frying. Boxty in the oven: placed into a pancake-like batter and baked in a loaf tin. Afterward, it is sliced and then fried. Whichever way you choose, your boxty can be a tasty inclusion to dozens of meals.

Boiled bacon and cabbage. Boiled bacon, boiled cabbage, and boiled potatoes rank highly on the list of favorites. Traditionally, the bacon was usually soaked overnight in order to remove the salt prior to being boiled.

Smoked salmon. Smoked salmon is scrumptious and can be served along with your favorite side dishes.

Black and white pudding. Black pudding is a traditional breakfast dish that consists of pork meat, fat, and blood mixed with barley, suet, and oatmeal in a highly seasoned sausage; however, it is not just eaten at breakfast. Black pudding can also be part of the menu at other mealtimes. White pudding differs only by omitting the blood and it is less popular than black pudding.

Coddle. Traditionally, leftover pork and bacon would be stewed slowly in the oven for a number of hours accompanied by sliced potatoes and onions. To create an upgraded recipe, use top-quality pork sausage and bacon and pair this dish with soda bread.

Barmbrack. This year-round fruity tea loaf has raisins, candied peel that can be steeped overnight in black tea and whiskey, and spices that all get stirred into the mix. It is customarily served engulfed in butter and presented with afternoon tea.

McGrath’s Irish Ale House is a wonderful establishment where patrons can get the true taste of Irish heritage and cuisine. We are located at 8110 Lakewood Main Street in Lakewood Ranch, Florida, and can be contacted by calling (941) 210-4398. Thank you for taking an interest in our restaurant and we hope to serve you in the near future.