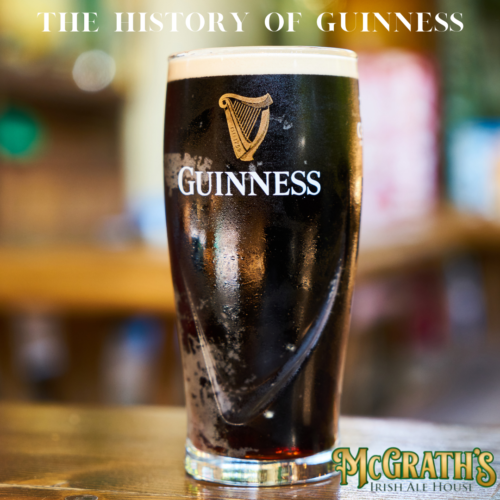 Have you ever stopped and wondered about the history of some of the world’s most famous alcoholic beverages? We have, so we want to tell you a bit more about Guinness stout. If you didn’t know already, Guinness is a dry stout made from roasted barley, among other ingredients. Guinness is black in appearance and has a roasted and dry flavor that is topped off with a thick creamy foam.

This delicious drink is a delight for the tastebuds, so you should consider trying it at Mcgrath’s Irish Ale House. If this snippet of information about Guinness stout has piqued your interest, you will enjoy our article about the history of this alcoholic beverage that is largely considered the most popular in Ireland.

The Interesting History Of Guinness Stout

If you’re curious about the interesting history of Guinness stout, you will find the below timeline insightful. We have briefly discussed everything you need to know about the history of this Irish staple drink.

Guinness would not have been invented if not for Arthur Guinness. Arthur was born in Celbridge, County Kildare, to an upper-class Protestant Anglo-Irish family in 1725. During his lifetime, he created and sustained one of the best alcoholic beverage brands in the world.

Since business was booming for Arthur, it’s unsurprising that he and his wife Olivia Whitmore, who he married in 1761, had 21 children. Unfortunately, only 10 of the couple’s 21 children survived into adulthood. In 1803, Arthur died at the age of 78, leaving behind a legacy that none have managed to best.

Now that you know a bit more about the founder of Guinness stout, it’s time to look at its early history. In 1755 well before he married, his wife Arthur leased a brewery that only brewed ale which was an immensely popular drink at the time. Four years later, in 1759, after his brewery saw steady success, Arthur decided to lease a significantly bigger brewery where he signed a lease for 9,000 years.

It wasn’t until 1778 that the Guinness company began brewing porter (stout) in addition to ale. This addition to the brand allowed it to further expand in 1799 and switch to solely producing porter. Thus the single stout, double stout, and extra stout were born.

These stouts became incredibly popular in Ireland and many other countries. So popular that by 1803, the brewery was producing more than 20,000 barrels of stout each year, and by 1876 the barrel output increased to an exceptional 7779,000. Additionally, in the 1930s, Guinness became the seventh-largest company globally.

The Year The Recipe Changed

If you have thought the Guinness stout recipe remained unchanged for more than 100 years, you would be mistaken. In 1973 the original recipe was changed, and the taste was altered using isomerized hop extract and palt melt. This was done in the hopes that declining sales would improve.

Although declining sales didn’t much improve, the brand was relaunched in 1981, and in recent years the Guinness brand has merged with Grand metropolitan but has retained its rights to its products and trademarks. So fear not, because this Guinness stout isn’t going anywhere.

As you can tell, the history of the Guinness stout is interesting and impressive. For more than 100 years, Guinness stout has been an influential brand in the alcohol industry. To try it out for yourself, you can order a pint at McGrath’s Irish Ale House and think back on everything you have learned today. You can visit our restaurant at 8110 Lakewood Main St., Lakewood Ranch, Florida, or contact us at 941-210-4398 to book a table to enjoy a tasty meal with your pint of Guinness stout.