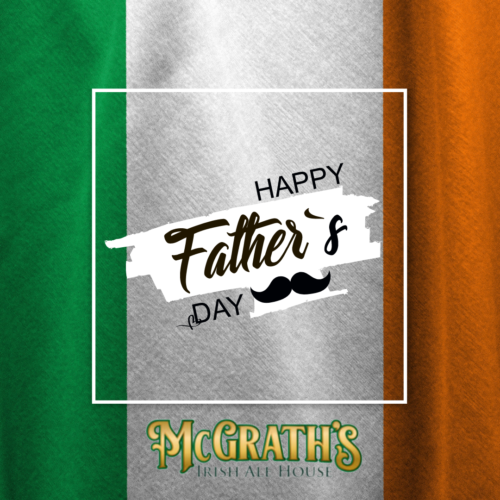 On June 21st of this year, we celebrate Father’s Day. This tradition, in which we acknowledge the joy and hard work of fathers everywhere, began its practice in the United States in the year 1910. While many people have their own traditions that coincide with this unique holiday, McGrath’s Irish Alehouse invites you and your father to celebrate with us…the Irish way!

For 2022, Father’s Day in Ireland is observed on June 19th, which happens to fall upon a Sunday. In Ireland, the holiday is usually observed on the third Sunday in June and is linked to St.Joseph, father of Jesus and husband to Mary. His guardianship of the messiah has been integrated into the celebration of the father, and the solemn duties that he blissfully attended to.

In Ireland, Father’s day is celebrated with gust, enthusiasm, and reverence for the patriarchal figure of the family. It’s usually observed through the act of giving gifts, a hearty meal, and allowing for a day of rest. Many clubs and civic organizations in Ireland hold events and gatherings to recognize fatherhood and its important place in the development of a healthy child.

While Father’s Day isn’t held in the same reverence as a holiday like Christmas, there are several facts that are attributed to the lore of Dad’s special day.

The luck of the Irish is always with you when you decide to visit McGrath’s Irish Ale House. And when it comes to celebrating your Father’s luckiest of days, our location offers authentic cuisine and the heartiest of beverages to make him feel like a king. For more information, come on down to the end of the rainbow at mcgrathsirish.com.