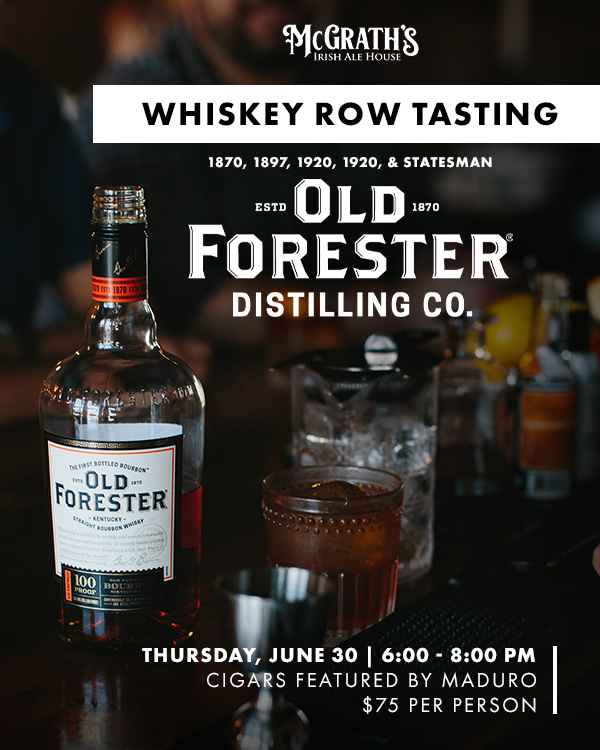 If you’re a frequent visitor to McGrath’s Irish Ale House, then you’re well aware of our authentic Irish cuisine, warm and welcoming atmosphere, and a fine selection of drinks that are almost too potent to resist. And while Halloween is still more than a few months away, we’re extending an invite to you, our favorite customers, to hold communion with some spirits…the kind that has a bold taste and is known for their potency. But they just aren’t any ordinary spirits, these are exclusively found in a bottle of Old Forester.

This is one event you won’t want to miss, as cigars for this spectacular occasion are being provided by Maduro. We’re holding the event on June 30 2022 from 6:00 to 8:00 PM. The event price is $75, and we should note that it’s worth every penny.

While the relationship between the Irish and their whiskey has always been a tightly knit bond, and it’s right there in the origin of its name, which is Gaelic for “water of life.” there are actually health benefits for drinking whiskey that date back hundreds of years. The drink first began making appearances in Scotland and Ireland in the 1600s. Apothecaries prescribed the potion for skin care, premature aging, and even congestion.

This trend of prescribing whiskey for a variety of medicinal purposes continued on into the 19th century, with doctors and dentists utilizing the potion as a crude form of anesthesia before its invention in the latter half of the century. This continues well into the 20th century, with doctors in the 1930s prescribing whiskey for pneumonia and high blood pressure.

While modern medicine has advanced to a degree that whiskey is no longer thought of as a healing elixir, there are some benefits to be had from moderate consumption of the beverage. Whiskey contains no carbs and actually has a considerable amount of B-vitamins per serving. It’s estimated that one serving of whiskey has only a slightly higher volume of calories than a can of light beer. (One serving of whiskey = approximately 130 calories. 1 can of Miller Lite = 96 calories.)

At McGrath’s, you’ll find authentic Irish cooking with the hospitality that the emerald isle is known for. Come on in and stay for a while. For more info about our establishment, follow the rainbow over to mcgrathsirish.com.